The first cut is the deepest, so they say, but this risk can be avoided by wearing cut resistant gloves with an EN388 rating. As well as being resistant to cuts, protective gloves tested to European standard EN388, like those in the Nitrex by Unigloves reusables range, are resistant to puncture hazards, abrasion and tears.

European standard EN388 applies to gloves that protect the wearer against mechanical risks. Protective gloves certified to the standard are rated in up to six different tests – one for each of the following risks: abrasion, circular blade cuts, tears, puncture, straight blade cuts and, if applicable, impact.

The gloves tested are then marked with a pictogram and a series of numbers and letters (see Fig. 1 below). These indicate the performance level achieved in each test. Together, they represent an overall ‘score’ that allows end users to determine which gloves offer the right level of protection for the job they’re doing.

Fig.1: Example of marking for the mechanical risks

Table 1: Explanation of the examples given in Fig.1

It is important to understand what these markings mean, as selecting the wrong glove for the task can be as dangerous as not wearing any hand protection at all.

What does tested to EN388 mean?

For each EN388 test carried out, a rating, or performance level, is assigned based on how well the glove material does in the relevant test, as follows:

The numbers and letters in the marking will always be in that order, so, on Unigloves’ Nitrex241PF PU Cut Resistant gloves, the marking 4X43F means the glove is rated as follows: 4 for abrasion resistance, X to indicate that the (older) coupe text was not performed, 4 for tear resistance, 3 for puncture resistance, F for cut resistance to a straight blade (newer ISO 13997 test) and it offers no impact protection (P).

Replacement of any of these numbers or letters with an X means that the test has either not been performed or is not applicable. For the pictogram to be displayed on a protective glove, it has to achieve a minimum level 1 or A for at least one of the tests.

Table 3: Levels of performance for materials tested with EN ISO 13997

In the abrasion resistance test, a sample of material from the glove is rubbed against abrasive sandpaper until a hole is worn in the material. The number of rubs, or cycles, it takes to wear the hole indicates the level of protection. A rating of level 4 means holing did not occur before 8,000 rubs. A rating of level 1 means it occurred between 100 and 499 rubs.

Following the revision to the EN388 standard in 2016, the coupe test is now limited to a maximum of 60 cycles, because the blade becomes blunt over time. If this occurs, and the blade has still not cut through the material, an additional cut test is carried out. This is the ISO 13977 test (see below).

A sample of glove material, cut approximately into a trouser shape, is clamped in the jaws of a machine that tests tensile strength. The jaws are moved apart so that the force needed to tear the material can be determined. In other words, it is tear propagation that is measured, and not tear creation. A material whose performance is rated as level 1 can withstand a peak force between 10N and 25N, while a level 4 material requires a force of at least 75N to tear it apart.

This cut test was included during the 2016 revision of EN388 to assess more complex materials that may blunt the blade used in the coupe test. It involves drawing a straight blade across the sample in a single movement, at a constant speed but with increasing force, until it breaks through the material.

Level A cut resistance under this test indicates a force between 2N and 5N is required to break through the material. Level F (equivalent to cut level 5) indicates an amount of force greater than 30N is required.

All the protective gloves in the Nitrex by Unigloves reusables range have been tested for abrasion, tear and puncture resistance, as well as to either the coupe test or the ISO 13997 test (or both, in the case of a small number of Nitrex products).

Table 4: Levels of test performance for the gloves in the Nitrex by Unigloves range 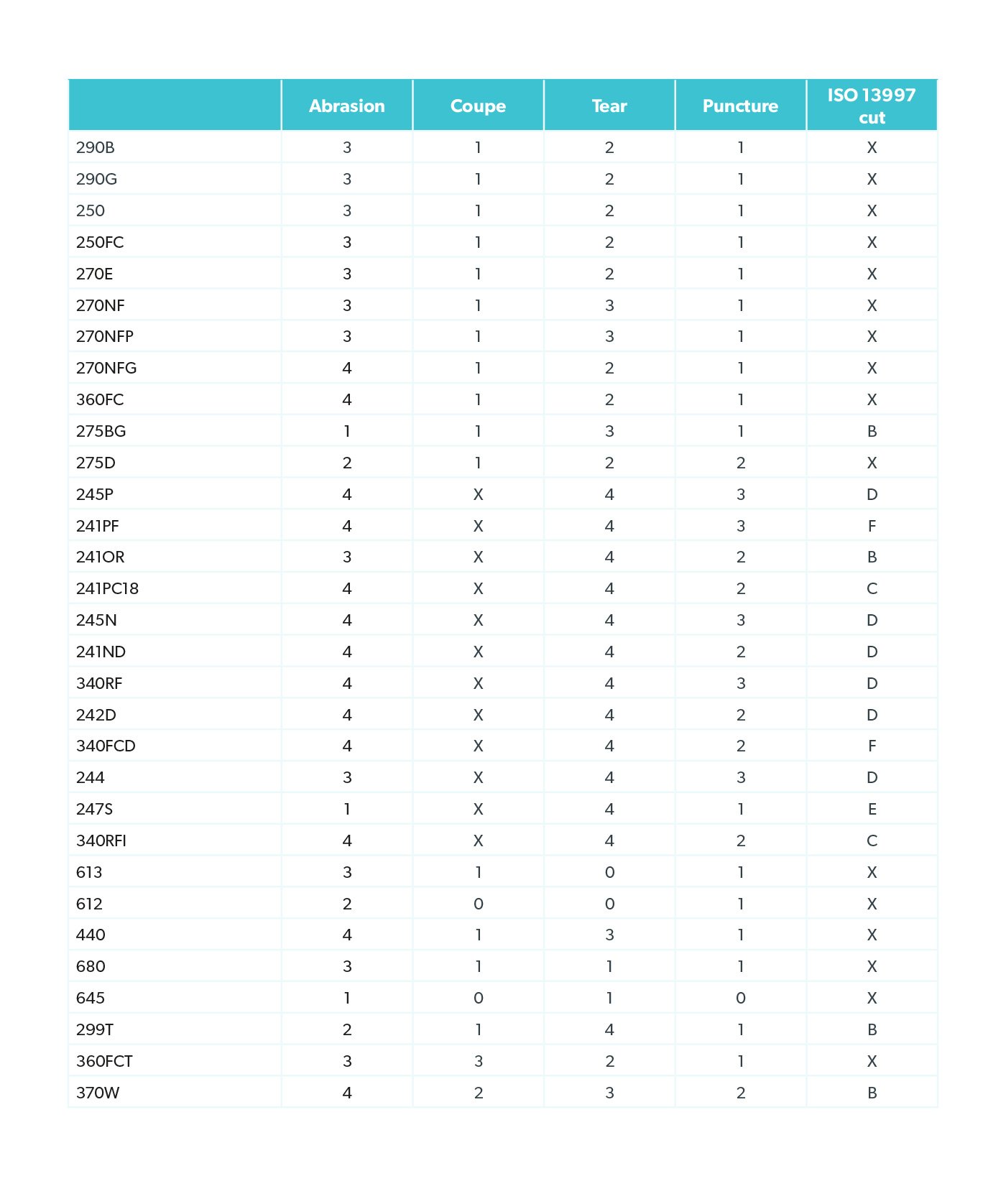 The Unigloves Nitrex range of reusable gloves has been developed to be extremely comfortable and dextrous, as well as protection against a range of specific hazards. Browse the range for EN 388-compliant products suitable for mechanical protection or contact our team to find your nearest distributor.

To learn more about EN standards as they relate to protective gloves, download our Glove EN Standards Guide.